July 16, 2020 • Back to School v CoViD 19  Trump and DeVos say the schools will be open in the Fall. Superintendents, principals, teachers, and parents aren't so sure it's a good idea. Where do we go from here?

Should high schools have athletics in the coming school year? Steve Kallas and Janelle Allbritton discuss the global and local issues and decisions.

CoViD-19 and College Football: What's Next?

On Kallas Remarks, ESPN’s Joe Staszak and Steve Kallas discuss the changing world of college football: Will they play? And, if so, when?

Just how far does a sneeze project all those tiny droplets, and how far? Schlieren Imaging can help you see that in slow motion.

Cam Newton Signs With the NFL

ESPN’s Joe Staszak and Westchester County Post sports editor Steve Kallas discuss the effect the Cam Newton signing will have on the NFL, as well as some reopening issues the major sports may have soon.

Podcast starts at the 30 second mark.

Janelle Allbritton, MPH and Steve Kallas tackle the trifecta of the NFL's leadership and team owners, racism, and the athletes' calls for social justice in the context of the CoViD-19 pandemic.

For more context on the statements regarding the NFL team in Washington (the "Redskins,"), please see the articles below under the heading, "Racism and the NFL: A Long History

Racism and the NFL: A Long History

Janelle Allbritton, MPH and Steve Kallas tackle the trifecta of the NFL's leadership and team owners, racism, and the athletes' calls for social justice in the context of the CoViD-19 pandemic.

For more context on the statements regarding the NFL team in Washington ("The Redskins"), please see the articles below.

To read the article referenced at 9:30, visit HERE.

To read a related article in the Berkeley News, visit HERE.

Joe and Steve discuss the return to sports and the upcoming Belmont Stakes.

Check Out the latest sports comments from Steve kallas

Joe Staszak and Steve Kallas discuss the re-opening (NBA and NHL) and the opening (MLB and NFL) of the four major sports from a CoViD-19 perspective and a money (where applicable) perspective.

(Note: this podcast starts at the 21 second mark.)

Created by a 17 year old during the CoViD-19 pandemic, this website gives excellent information.

To see a video about this, visit HERE.

CoViD-19 Info for the USA

What will happen now to this year's student-athlete Seniors?

With the recent implications from COVID-19, the NCAA has decided to cancel all remaining Winter tournaments as well as suspending Spring sports. Given the current state of college athletics, many fans are associating with basketball and football. But what about the college seniors whose careers were effectively cut short?

Student-athletes know they are playing with limited time. Unless they are being scouted by professional scouts, a majority of players know their time is up after their final game. With the abrupt halt of the season, many Seniors effectively played their final game before their regular season even ended.

Look at it from this perspective: if I’m a college Senior and I’m not getting looked at by scouts for the professional level, I have the entire season to learn how to cope with the season ending. These students didn’t have that chance. I have seen all over social media the heartfelt, sincere, and heart-breaking posts of student-athletes saying goodbye to the game they have known since they were children: “This isn’t the way I imagined it would end” and “I don’t know how to move on from the game I’ve known since I was in Little League.”

There is no Senior Day. These athletes won’t have the chance to be honored the way they should be. Part of the allure of being a Senior is to go out and enjoy being the “face” of the team. You’ve been there the longest, you know what it takes, you’ve been there. Everything was taken away from you.

There have been talks and reports coming in the recent hours that the NCAA is looking into giving another year of eligibility to the Spring sports. But who is to say that these students would return? While it’s a good idea in theory, you have to think it through. These student-athletes are preparing for their life outside of sports -- they’re prepping for their professional careers. If they secure a job pre-graduation or even a few weeks post, they most likely won’t return to play. Or if they do return to play, how will that play out?

To be an athlete for the NCAA, you must be enrolled in six credit hours. What are the returning students going to enroll in if they already received their degree? Do they enroll in a graduate program? There are many implications which the student athletes and NCAA have to look at for this to work out. It’s unfortunate that this had to happen, and my heart goes out to all the Seniors. With the rules and regulations that the NCAA has set forth, there seems to be no way for this to be a win-win turnout for anyone involved. 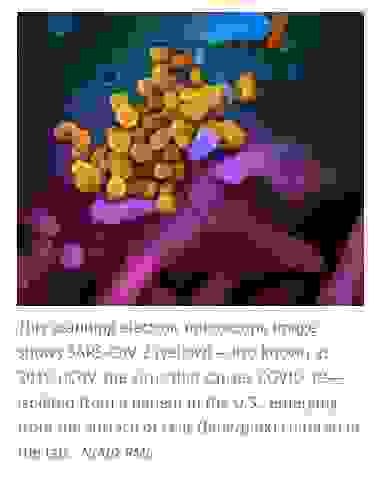 The virus that causes coronavirus disease 2019 (COVID-19) is stable for several hours to days in aerosols and on surfaces, according to a new study from National Institutes of Health, CDC, UCLA and Princeton University scientists in The New England Journal of Medicine.

Speaking of Sports with Steve Kallas

On Screen with Janelle Allbritton, MPH

or hear archives of